skip to main | skip to sidebar

New England Legends is on a mission to chronicle every legend in New England one story and one week at a time. They are doing this through their weekly podcast which has garnered over 2 million downloads in 79 different countries, their Emmy-nominated television series on PBS and Amazon Prime, and through their super-secret Facebook group. Check their site out! 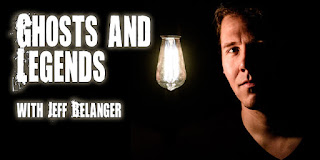 If we’re to believe the history books, folklore, and thousands of eyewitnesses over the last few centuries, New England is full of ghosts, monsters, and other mysteries that are more than just campfire tales. New England Legends on PBS follows adventurer, author, and New England native Jeff Belanger as he explores these many tales around New England.

A legend is a living, breathing thing. These aren’t just campfire tales. These legends define who we are as a people, a community, and a region.

With no big budgets or networks backing them, four guys with a passion for these great legends got together to produce New England Legends.

The show began airing October 31, 2013 on WGBY in Springfield, Massachusetts, since then Vermont PBS, and Rhode Island PBS have also aired our episodes. In 2017, the episodes also became available on Amazon Prime.
Posted by C.A. Chicoine at 11:03 AM